I have a 2014 Infiniti Q50 Sport with built-in NAV (No Tech) and for a moment I was beginning to think I wasn't going to get Carplay for my year of the vehicle.
I did some research and ended up stumbling upon Unavi. I chose to install the module myself using the provided videos and manual.
After some trial and tribulation, I got the radio in with some words of encouragement from Unavi text support and made the sign of the cross as I powered on the vehicle.
Screen came on and immediately loaded to the carplay module. I was ecstatic!! To finally have the CarPlay made me so happy. I have been using it for 2 days now and i couldnt be any happier. I-Knob control works significantly better than I ever imagined and overall I feel that controlling music with the module is so much faster than the stock system.

Thank you guys at Unavi for developing this! This is super legitimate guys!! 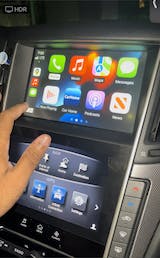 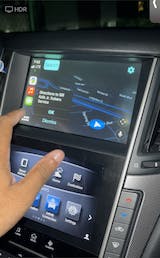 Thank you soo much . Made me love my car all over again . It was kinda difficult to find someone to install it. But finally i got it done ✅ 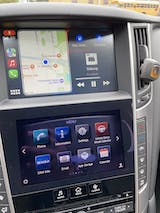 Definitely a good to have in your Q50. Easy to install and fully reliable to bring CARPLAY to your Q50

J
JURXHIN DERRAJ
Overall, I would highly recommend this module over the other stuff out there.

I’ve had the Carplay/Android Auto module for my Q50 for a few months now, and it’s great! Everything works perfectly, there is no lag (none more than the OEM system anyways), and the sound quality is great. I show off the AA feature on my video, but I’ve tried Carplay as well and it works flawlessly too. For the DIY-ers, the installation is very similar to other modules on the market. Functionality wise, there’s not much to say. If you’ve used AA/Carplay before, it’s just like that. Siri and google assistant work flawlessly as well. The audio output is AUX, which I was a little iffy about at first, but their wiring does a good job at reducing noise, so for me it sounds just as good as Bluetooth.

The tiny speaker that goes behind the top screen does not sound good at all, but I personally have never used it intentionally (see cons for more on this). All my audio and calls go through the car speakers, but I do connect my phone via Bluetooth for calls to my car, so maybe that’s why. The module allows for this without breaking any of the experience, and you can launch calls this way either using the module or the OEM car system.

Overall, I would highly recommend this module over the other stuff out there.

I have the very first version of this module, which is touchscreen only. All the OEM functions for the OEM system are preserved, but you can’t use the rotary knob or steering wheel controls with AA/Carplay. The new recent module FIXES this. I haven’t gotten it yet, but I know people who have, and they say that it works perfectly fine, with both the center console controls and the steering wheel controls. I’ll probably upload another video of this once I get mine.

Lastly, customer service with UNAVI is top notch. Their US team has been very responsive and helpful with all my questions. When I complained about the lack of physical control usability, they put me in touch with the Korean team directly who have now released a whole new module addressing this within a couple of weeks. Not to mention that they apparently work with Infiniti of Korea, so these products are pretty well tested and tried with Korean consumers.

The pros for me over other modules:
-It uses the car’s OEM hardware for all audio (except for that tiny speaker I talk about above). No need to install some questionable quality microphone or have some random cheap control wheel sticking out of the dash.
-It works very seamlessly. I don’t have to do any weird boot up or worry about crashes. You just plug in your phone and you’re good to go.
-Customer service is great! They really seem determined to back up their products. Their headquarters in CA just makes this process so much easier too.
-It utilizes the top screen, which is great since it’s basically useless in the OEM system. The bottom screen works just like normal and is unaffected.
-Overall, it just works like any other OEM AA/Carplay from other cars. There’s no weird work-around or anything.

Cons:
-Every now and then, at startup, the module starts playing music off of the tiny speaker. This is a default when you select your audio source other than AUX while still trying to play music with the module. Twice now, it has played from the tiny speaker even though I set my audio source to AUX. This seems like it’s an issue with the car system not switching correctly, but all I’ve had to do is switch to radio and then back to AUX, which fixes it. I’ve only had it happen twice and it’s just a mild nuisance. 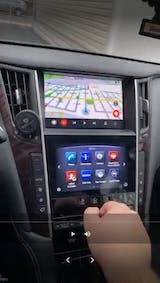 N
Nicolas C.
VERY happy with their service and their product

I saw this company on an Internet forum. Did some research, and while they had a sale, decided to get in on the good deal. They did not disappoint! The product itself was a great addition to the vehicle. They were also very friendly and professional. I was in-and-out within an hour! VERY happy with their service and their product! 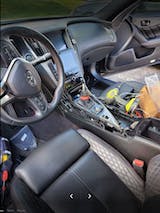